A Swedish court has sentenced an Iranian Official to life in prison in a historic trial. 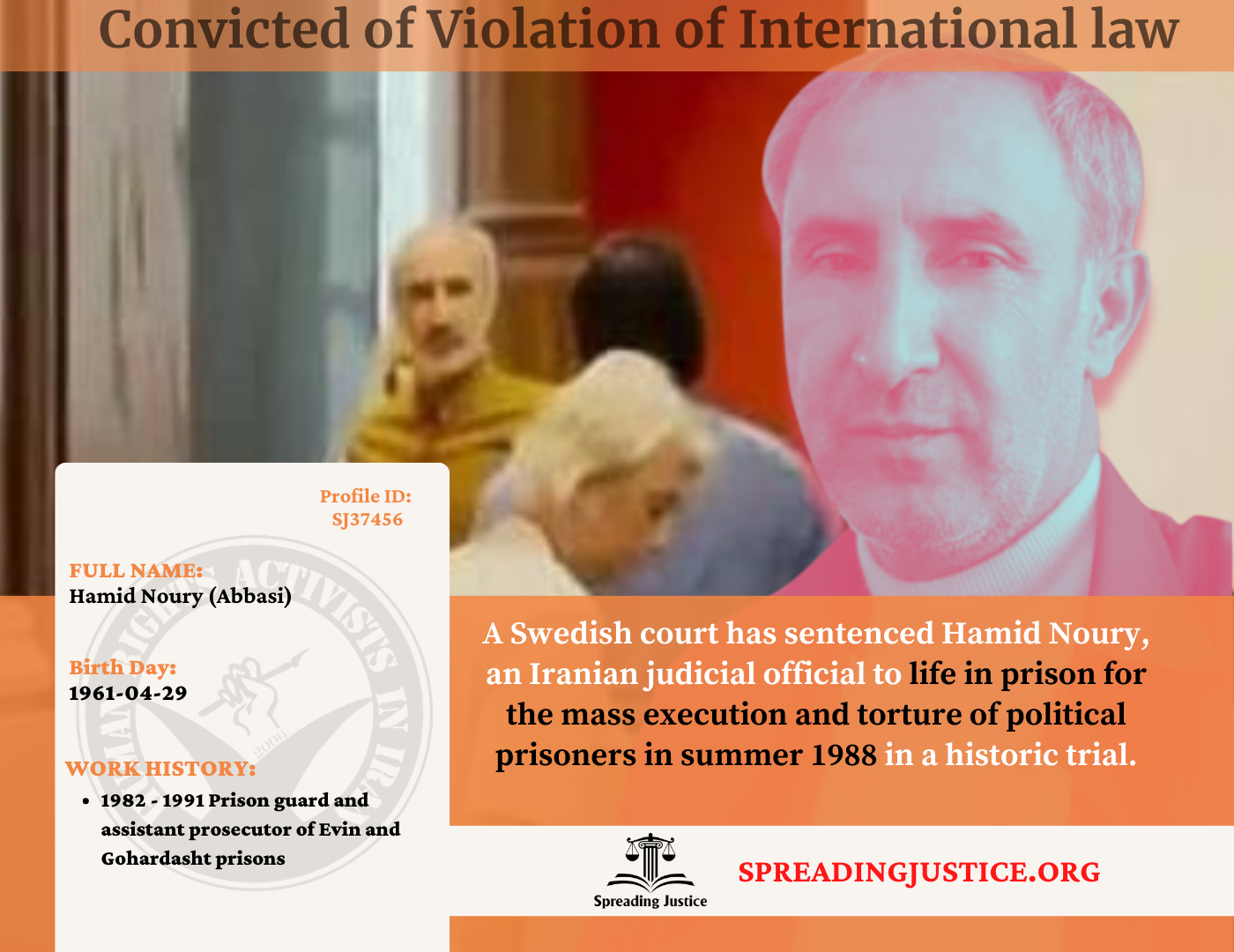 Hamid Noury (Abbasi), 61, was a judicial official in the early years of the inception of Islamic Republic of Iran. He was directly linked to Mass executions of 1988 in Gohardasht prison, and sentenced to life in a historic trial by a Swedish court.

The Trial is of historic significance, as it is the first time an Islamic Republic’s official is held accountable internationally for atrocities committed locally and the violation of international law.

Hamid Noury worked as Assistant to the deputy prosecutor in Evin Prisons in Tehran and Gohardasht (Rajai Shahr) Prison in Karaj From 1982 to 1991. At the time of  the mass executions of the summer of 1988, in which thousands of political prisoners and prisoners of conscience were executed by the judiciary of the Islamic Republic, he was one of the effective members of the execution committee in Gohardasht prison during this massacre.

Historic Significance of the Trial for Universal Jurisdiction

Today on Thursday July 14, 2022, in a historic sentence, the final verdict was issued by Judge Tomas Zander in the Swedish court, and Hamid Noury was sentenced to life in prison for “Mass execution and Torture of political prisoners.”

Hamid Noury was arrested on November 9, 2019 during a trip to Sweden at Stockholm Airport on charges of “premeditated murder, crime against international law and war crimes” for direct role in a serious and widespread human rights violation.

Hamid Noury’s trial began in 2021, and over many sessions witnesses have testified to his role in giving death sentences and walking prisoners to their execution sites.

Hamid Noury’s Trial is remarkable for many reasons. Most importantly, It is the first time an Iranian official is sentenced in a foreign court for violations of International Law.

Secondly, the crimes took place about 34 years ago and there has been no site access for investigations and NGO’s Private investigations were submitted for the trial, also the trial largely depended on heart wrenching testimonies of witnesses.

Thirdly, this was an international effort for justice, as witnesses and activists from across the world set foot forward to testify against Noury’s crimes, in multiple trials that took place over a year. In this rare international effort for justice, the court briefly relocated to Albania to accommodate witnesses that could not be present in sweden.

This Trial is of historic significance not just for Iranians but for everyone seeking international justice, as it brings hope to possible prosecution of other perpetrators that have committed atrocious crimes years ago and who enjoy impunity locally.